Mark Steyn – A Confection of Insurrection

Posted at 09:40h in A C W T Statements by ericgeorgatos

Few pundits can match the intellectual and ‘articulation’ horsepower of Mark Steyn.  His column on the one-year anniversary of the January 6, 2021 ‘activities’ at the US Capitol (reproduced below) is primarily composed of reviewing his written observations of that day…made within 24 hours of when it actually happened.  Which is to say, he saw the manufactured narrative–a ‘storming’ of the Capitol to overthrow the government–for the fraud it was at the time, and still is.

In the intervening year, all sorts of evidence has emerged to back him up:

On top of everything else, Dr. Douglas Frank and Seth Keshel, among others, have demonstrated by actual data beyond any doubt whatsoever that the 2020 election was rigged and stolen.  The millions of Americans in Washington DC on January 6, 2021 already sensed what Frank and Keshel have since confirmed–that an election in which five swing states stop vote-counting at the same time and at a point when Trump was leading in all five, only to have voting resume the next day with Trump losing all five, was and is transparently rigged.  Their presence in Washington DC was to register a righteous protest…and righteous it was and is.

It’s stunning that the ruling class still believes its fraudulent narratives are not exposed; that the American people are stupid and can be led around by the nose without regard to truth or facts; that a ruling class can remain a ruling class while standing on a platform of blatant lies.

A Confection of Insurrection 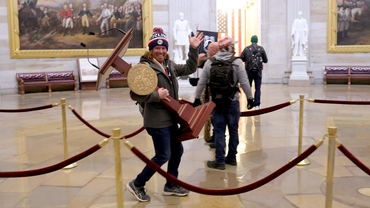 ~The January 6th anniversary observances by the Democrat-media class from Joe Biden down are sick-making even by the debased standards of American politics. I’m disinclined to join them. In the last twelve months, I’ve done multiple monologues on TV and radio about America’s political prisoners, the weaponization of Officer Sicknick’s death and the now routine FBI humbuggery about key evidence such as – ooooooh! – a Lego model of the Capitol on which the insurrectionists had plotted the whole thing. Which inevitably, like almost every FBI utterance these days, proved to be total bollocks.

So instead I will merely reprise what I said in the immediate hours after the “insurrection”. If you want the short version, here’s the Washington Times headline:

If you’re still interested in hearing the long version, first up was my appearance with Tucker as the “storming” of the Capitol was coming to a close:

So I found yesterday’s coverage somewhat trying… The political class (represented by a Speaker who flies home to San Francisco on her own government plane) has been largely insulated from the pathologies they have loosed upon the land. For a few hours yesterday they weren’t.

During the early evening I found myself wondering why the pundits were so insistent on standing on the Capitol’s dignity. The obvious reason is that, for the most lavishly protected legislature in the world (okay, make that “legislature”), it was a total security fiasco – culminating in the murder of an unarmed woman by a (to put it mildly) totally incompetent copper firing into a crowd (which an American couldn’t do in, say, Kandahar). The rubbish about the “desecration” of the “sacred” “majesty”, etc, etc, peddled by Democrats and Republicans alike is designed to evade the vile reality of that grotesque act.

I returned to the subject the following morning:

As I said earlier, I find myself at odds with virtually the entire politico-media class in my reaction to the “storming” of the US Capitol… I was surprised that even politicians and pundits could utter all that eyewash about “the citadel of democracy” and “a light to the world” with a straight face. It’s a citadel of crap, and the lights went out long ago: ask anyone who needs that $600 “relief”.

I despise the United States Congress, and not merely for the weeks I had to spend there during the Clinton impeachment trial: My contempt pre-dates that circus. It dates to the moment I first realized, as a recent arrival to this land, that when Dick Durbin or some such is giving some overwrought speech on a burning issue he is speaking to an entirely empty chamber – because there are no debates, because most of these over-entouraged Emirs of Incumbistan are entirely incapable of debate: See, inter alia, Ed Markey.

But the fact that they might as well be orating in front of the bathroom mirror isn’t why I despise it. It’s that the American media go along with the racket, and there’s only the one pool camera with the fixed tight shot so that you can’t see the joint is deserted and the guy is talking to himself. The wanker press is so protective of its politicians that it’s happy to give the impression that a boob like Markey is Cromwell in the Long Parliament…

That leads easily to the next stage of decay – for why would a Potemkin parliament not degenerate further into a pseudo-legislature? The Covid “relief” bill is 5,593 pages. There is no such thing as a 5,593-page “law” – because no legislator could read it and grasp it. For purposes of comparison, the Government of India Act, which in 1935 was the longest piece of legislation ever drafted in British law and which provided for the government of what are now India, Pakistan and Burma, is 326 pages.

Oh, I’m sure paragons of republican virtue will object that no Indian or Burmese citizen-representatives were involved in that piece of imperial imposition. Well, no American citizen-representatives were involved in the Covid “relief” bill. The legislation was drafted not by legislators, nor by civil servants, nor even by staffers or interns. Instead, a zillion lobbyists wrote their particular carve-outs, and then it got stitched together by some clerk playing the role of Baron von Frankenstein. The “legislators” voted it into law unread, and indeed even unseen, as the Congressional photocopier proved unable to print it: It was a bill without corporeal form, but the yes-men yessed it into law anyway.

Whatever that is, it’s not a republic. As beacons to the world go, stick it where the beacon don’t shine… Whatever Sudan and Chad and Waziristan need, it’s not the US Congress.

I followed Marco Rubio on Tucker last night, and I was fairly seething by the time he’d said goodnight. To demonstrate what a regular citizen-representative he is, Marco said he knew the names of some of the Capitol Police charged with protecting the building. Really? Does he know the name of the officer who shot dead Ashli Babbitt, an unarmed woman and Air Force veteran? If so, perhaps he could tell his chums in the media, because none of them seem in the least bit interested. Indeed, on the evidence of the hourly radio bulletins I heard today, the courtiers of the American media have evidently agreed to avoid mentioning that Ms Babbitt died at the hands of the police. Gee, it’s almost as if they’re trying to give listeners the impression that she was killed by crazed Trump supporters.

I would be interested in knowing more about the Capitol Police, which flunked its responsibilities totally yesterday and never more so than in that fatal shot fired into Ms Babbitt’s neck.

The Capitol Police rang a vague bell with me, and I eventually recalled the last time I’d written about their shooting of a young woman, seven years earlier. Please read on to what I regard as the most repulsive aspect of this story: Congress’s standing ovation for the Capitol Police’s dispatch of that poor defenseless mom. You can read the full column here, but this is the pertinent part:

An unarmed woman was gunned down on the streets of Washington for no apparent crime other than driving too near Barackingham Palace and thereby posing a threat to national security. As disturbing as Miriam Carey’s bullet-riddled body and vehicle were, the public indifference to it is even worse. Ms Carey does not appear to be guilty of any act other than a panic attack when the heavy-handed and heavier-armed palace guard began yelling at her. Much of what was reported in the hours after her death seems dubious: We are told Ms Carey was ‘mentally ill’, although she had no medications in her vehicle and those at her home back in Connecticut are sufficiently routine as to put millions of other Americans in the category of legitimate target. We are assured that she suffered from post-partum depression, as if the inability to distinguish between a depressed mom and a suicide bomber testifies to the officers’ professionalism. Under DC police rules, cops are not permitted to fire on a moving vehicle, because of the risk to pedestrians and other drivers. But the Secret Service and the Capitol Police enjoy no such restraints, so the car doors are full of bullet holes. The final moments of the encounter remain a mystery, but police were supposedly able to extract Ms Carey’s baby from the back of a two-door vehicle before dispatching the defenseless mother to meet her maker.

Did I mention she was African-American? When a black teen dies in a late-night one-on-one encounter with a fellow citizen on the streets of Sanford, Florida it’s the biggest thing since Selma. But when a defenseless black woman is gunned down by a posse of Robocops in broad daylight on the streets of the capital, the Reverend Jesse Jackson and the Reverend Al Sharpton and all the other bouffed and pampered grievance-mongers are apparently cool with it…

In perhaps the most repugnant reaction to Ms Carey’s death, the United States Congress expressed their ‘gratitude’ to the officers who killed her and gave them a standing ovation. Back in the Eighties, the Queen woke up to find a confused young man at the end of her bed. She talked to him calmly until help arrived and he was led away. A few years later, Her Majesty’s Canadian Prime Minister, Jean Chrétien, was confronted by an aggrieved protester. As is his wont, he dealt with it somewhat more forcefully than his sovereign, throttling the guy, forcing him to the ground, and breaking his tooth, until the Mounties arrived to rescue the assailant from the PM. But, had the London and Ottawa intruders been gunned down by SWAT teams, I cannot imagine for a moment either the British or Canadian Parliament rising to applaud such an outcome. This was a repulsive act by Congress.

Miriam Carey is already forgotten, and the lawyer her family hired has now, conveniently, been jailed for a bad debt. I am not one for cheap historical analogies: My mother spent four of her childhood years under Nazi occupation, and it is insulting to her and millions of others who know the real thing to bandy overheated comparisons. But there is a despotic trend in American government. Too many of our rulers and their enforcers reflexively see the citizenry primarily as a threat. Which is why in Congress the so-called people’s representatives’ first instinct is to stand and cheer the death of a defenseless woman.

~from The [Un]documented Mark Steyn.

Ted Cruz’s remarks on the January 6th anniversary were very much in the spirit of that 2014 Congress. But no doubt there’s some dark strategic purpose to his triangulating.

UPDATE:  ‘A picture is worth a thousand words’