Posted at 09:49h in A C W T Statements by ericgeorgatos

It’s difficult for many of us living in the Lone Star state to come to grips with who and what George W. Bush has over time revealed himself to be, but Mark Steyn helps in the post below.    Bush leaves no doubt:  America’s peril is a product of the disconnect between ‘we the people’ and the Uniparty/elites/ruling class/globalists…whatever label you prefer. 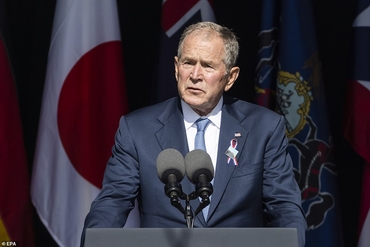 The official observances for the twentieth anniversary managed to be even more wretched and grotesque than I’d expected – the most obvious affront being Bush’s equivalence between the perpetrators of 9/11 and the “perpetrators” of 1/6: They were both “children of the same foul spirit”, he declared, diminishing the three thousand victims of the former by comparing them to a congressman who had to hide in the stationery cupboard because some goofball was taking selfies with his feet up on the desk.

FAA Command Center: “Do we want to think about scrambling aircraft?”

FAA Command Center: “That’s a decision somebody’s going to have to make, probably in the next ten minutes.”

FAA Headquarters: “You know, everybody just left the room.”

“Everybody just left the room”: Your federal government in action. Under Bush, no one paid a price for it: That’s your “foul spirit” right there, Pericles. It will be the same when the Chinese yank the rug out from under the dollar: Everybody just left the room – at the White House, at the Fed, at the Treasury …but not at the IRS, where they’re still hard at it freezing the savings accounts of January insurrectionists’ nine-year-old grandkids.

Six months to the day after 9/11, Dubya’s Immigration and Naturalization Service (as it then was) mailed out two student visas to Mohammed Atta and Marwan al-Shehhi at their Florida flight school. Unfortunately, Messrs Atta and Shehhi were unable to avail themselves of their new American visas as they had neglected to have their mail forwarded to their new address at Big Smoking Hole in the Ground, Lower Manhattan.

So the forty-third executive branch, on its new money-no-object war footing, is handing out visas to deceased terrorists whose pictures have been on the front pages of American newspapers? No way was Bush putting up with that! He acted decisively – and moved Janis Sposato “sideways” to the post of “Assistant Deputy Executive Associate Commissioner for Immigration Services”, where she needed a much longer business card that stuck out awkwardly from her breast pocket, which is kind of embarrassing at cocktail parties.

America is a land that rewards failure (see Thoroughly Modern Milley’s chest), which is why it lost the war. On 9/11 Bush had left the room to read My Pet Goat to grade-schoolers, after which he spent the day being flown to one “secure location” and then leaving the room to fly to another (presumably even more) “secure location”. On Saturday, he was speaking in Shanksville, Pennsylvania, where twenty years ago, after “everybody left the room”, the ad-hoc militia of the fourth plane provided the only good news of that grim Tuesday: If the twin towers were Pearl Harbor, Flight 93 was the Doolittle Raid, and on the very same day.

Bush owed a debt to these men for acting while he was invisible. Yet his brief remarks barely mentioned those heroes, and none by name. Instead, he retreated to the lame tropes of the ruling class, and started yakking on about “nativism” and “religious bigotry” (ours, not the hijackers’) in contrast to those admirable Americans who “reaffirm their welcome to immigrants and refugees”. These are surely pitiful consolations for the Afghan debacle, and weirdly irrelevant to the heroes of Flight 93, who were rather deplorably unicultural – “white male frat jock yuppies“. As for “welcoming immigrants”, one might think that, even for as oblivious a ruling-class man as Bush, that would be in somewhat bad taste given what happened twenty years ago. From page 249 of After America:

In the 7-Eleven parking lot in Falls Church, Virginia… four young men obtained the picture ID with which they boarded their flight on September 11th.

They did so by bribing a Salvadorean illegal immigrant to certify that they all lived at his address. Hundreds lived in his modest flat: it’s part of the non-gaming of the non-system that is not only tolerated but venerated by the Uniparty.

Among the beneficiaries of the 7-Eleven ID scam was Ziad Jarrah, who led the team that stormed the cockpit of Flight 93 and who took the pilot’s seat.

Which is why Todd Beamer, Mark Bingham, Jeremy Glick, Tom Burnett and thirty-six other passengers and crew are dead.

Yet, even speaking at their memorial, Bush is so low and unworthy that he cannot resist the driveling mawkish sentimentalization of “immigration” that, in fact, enabled the murder of Beamer et al.

While we’re on the subject of immigration, I turn as more and more Americans do to the foreign press:

The FBI has released its first declassified 9/11 document exactly 20 years after the deadly terror attack which claimed the lives of 2,996 people…

The FBI file that is significantly redacted details a 2015 interview with an official who worked at the Saudi Consulate in Los Angeles.

He admitted that he allowed two hijackers to use his apartment and helped them travel around LA. He was found to be an al-Qaeda ‘facilitator’ by the FBI… He was also a close associate of two other Saudis, Omar al-Bayoumi and Fahad al-Thumairy, who the helped the hijackers.

The new FBI file reveals that al-Bayoumi, who has admitted befriending them, worked as a ‘ghost employee’ at a Saudi aviation firm in the US.

Hang on, what was that name again? Omar al-Bayoumi? That rang a dim and distant bell with me. From my Spectator column of November 30th 2002 – or thirteen years before the date of this FBI file:

Princess Haifa, the wife of the Saudi ambassador to Washington, gets a letter from a woman in Virginia she’s never heard of complaining about steep medical bills. Being a friendly sort of princess, she immediately authorises the Riggs Bank in Washington to make payment by cashier’s cheque of several thousand dollars per month to this woman, no questions asked…

Of the $130,000 she receives from the benevolent ambassadress, Majeda Ibrahin signs at least some of the cheques over to a friend of hers, who’s married to a guy in San Diego who’s helping two of the 11 September plotters.

And what was the name of that “guy in San Diego”? Here ya go…

How did Omar al Bayoumi, the penultimate recipient of the royal largesse, get to hook up with the two terrorists anyway? Well, there’s another amazing coincidence. Omar happened to be at the airport in Los Angeles, heard a couple of fellows speaking Arabic, struck up a conversation with them and waddayaknow, one thing led to another, they seemed like decent coves and so, even though he’d never met ’em before, before you know it he’s throwing ’em a big welcome party in San Diego and paying up the first couple of months’ rent for them on the apartment next door to his.

How was he to know Khalid Almidhar and Nawaf Alhamzi had just jetted in from an al-Qa’eda training camp and would go on to hijack Flight 77 and plough it into the Pentagon? Just one of those things, coulda happened to any guy who wanders round airport concourses looking for perfect strangers to cover the accommodation expenses of.

Okay, that’s me in 2002. Nothing happens to Mr al Bayoumi; he enjoys the protection of the Saudi royal family, and therefore of the American state. So how come he crops up thirteen years later in an FBI file on Mussaed Ahmed al-Jarrah, the Saudi consular employee in whose apartment two of the 9/11 hijackers were living? Well, because…

Mr Jarrah applied for US citizenship.

Did he get it? Has he been elected to Congress yet?

George W Bush is so attentive to his own security that, ahead of his state visit to the UK, he demanded the Queen replace every window at Windsor Castle. (Her Majesty told him to bugger off, as well she should.) Secure in their bubbles, the jetsetting globalists will never find themselves at the mercy of the fake ID racket and the other pathologies they loose upon their subjects. One final vignette from my 2002 piece:

Prince Bandar and his family dropped by the Bush ranch at Crawford a couple of months ago. Bush must have known for the best part of a year that in the run-up to 11 September Bandar’s wife, Princess Haifa, had been making regular transfers from her Washington bank account to a couple of known associates of the terrorists. Bandar must have known Bush knew. Each party knows the other party knows they’re engaged in a charade, but they observe the niceties, with Laura showing Princess Haifa the ranch, Bush hailing the ‘eternal friendship’ between the Saudi and American people, and Bandar regretting, as the Saudis always do, that they’re unable to be more helpful.

And so it goes, twenty years on.

I’m with the Queen: Bugger off, Bush.