Posted at 15:42h in A C W T Statements by ericgeorgatos

Mark Steyn’s writing is kind of like ice water thrown in the face…very bracing, with a wake up effect.  His latest is reproduced below…share it with anyone you know who is still asleep… 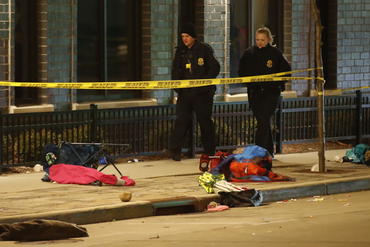 ~As I write, five persons are dead and over forty injured at the Waukesha Christmas Parade – a strange sentence to find oneself putting down in print. The injured include dozens of children, and the dead number members of Milwaukee’s Dancing Grannies. Waukesha is a town of about 70,000 about fifty miles from the world-famous Kenosha.

I switched on CNN this morning to find out the latest, and they weren’t covering the story. So I take it the facts are not helpful to “the narrative”. Is it in The New York Times? Why, yes, on page 22:

These sick racist four-wheel-drive-privileged SUVs are out of control. I hope they did something about that at COP-26.

As usual, Britain’s Daily Mail has more of an appetite for the story. Those who look beyond America’s corrupt media for the basic information will be aware that the man in custody is an “aspiring rapper” called Darrell Brooks Jr, or Jay Brooks, or MathBoi Fly, whose rap videos are already being scrubbed from social media. When he’s not rapping, he’s a career criminal with a rap sheet as long as the Waukesha parade: property destruction, battery, strangulation and suffocation; he’s also a “registered sex offender”. Two days before the attack, Mr Brooks was apparently released from jail by the Milwaukee County Attorney John Chisholm. His latest charges include domestic abuse, more battery, oh and felony bail jumping. So Mr Chisholm released him on $1,000 cash bail.

There will be more to say about this in the days ahead. But I will make two observations: First, one sign of a functioning society is the ease with which you can insulate yourself from its worst pathologies. It is getting harder and harder to do that in America – and so Granny goes to dance in a Christmas parade and doesn’t come home.

Second, had this been a story out of Germany or France, it would most probably have been what we used to call a “foreigner” – a “refugee” recently arrived from Syria or Afghanistan who finds the ways of the infidel decadent and disgusting. In America, the social fabric is being shredded by Americans who hate other Americans.

~Even if diminished in importance by the court eunuchs of the American media, Sunday’s bloodbath will complicate for them their preferred Wisconsin story. On GB News I discussed the Rittenhouse verdict with my old Rush chum, James Golden, aka Mr Snerdley (who has a terrific new book out on Rush this week). As thrilled as the right were finally to win one, Kyle Rittenhouse should never have been tried at all. Quite disgracefully, the highest figures in the land, from Joe Biden down, have now explicitly delegitimized the jury’s verdict, and a US attorney-general not above threatening School Board attendees may yet bring “federal” charges – one of those sleazy American innovations that undermines the basic Common Law prohibition against “double jeopardy”.

To use my old line from a decade in the craphole of US pseudo-justice, the process is the punishment. Kyle Rittenhouse appears to have survived the process, and may yet succeed in inflicting financial retribution on his defamers, starting with Biden, a goon who enjoys punching down. But many others do not survive. Over the weekend, several commenters discussed another self-defense case from the Summer of Floyd – that of Jake Gardner. Thanks to its ugly politicized prosecutors and the identity-group grievance hustlers to whom they are bidden, equality before the law is dead in America. I reprint what I wrote last year about Mr Gardner. Remember his name:

The passing of Ruth Bader Ginsburg dominated the weekend headlines, and will further destabilize an already whacky election campaign in its last six weeks. But the death of an all but unknown American may be more telling about the pitiful state of the country:

Way back on May 30th, in that hinge moment of the year when spring turned to summer and lockdown turned to looting, Jake Gardner found a mob of “mostly peaceful protesters” being mostly peaceful about the death of George Floyd outside his bar, the Hive & Gatsby’s, in downtown Omaha. His windows were broken, and his dad was getting shoved around. Douglas County Attorney Don Kleine, using the surveillance footage, walked his audience through the critical moments:

Gardner came up, asking, “Who did that? Who pushed my dad?” Someone was heard in the video saying, “he has a gun on him,” referring to Gardner. Kleine draws attention to the fact that windows are seen broken out of the bar.

Kleine said Gardner is heard saying, “Get off me, get off me, please get off me,” before the final shot is fired.

Kleine said the determination has been made that the shooting was in self-defense.

That would appear to be correct as a point of law. But this is America in 2020, with an evil and politicized justice system. Protests continued and the weakling Kleine’s worthless office came under pressure from #BlackLivesMatter – in particular an influential activist called JaKeen Fox who served on Omaha’s LGBTQWERTY advisory board and enjoys a good cop killing. So a week later the County Attorney caved and washed his hands:

On June 1, Donald W. Kleine, the Douglas County attorney, announced his decision not to bring a case against Mr. Gardner. A week later, Mr. Kleine said in a statement that after hearing from local residents and elected officials that he would welcome an outside review “in this rare instance.” He added, “I made a decision and I would not change that decision based on everything I know today.”

Yeah, but who cares what you think? The minute he tossed it to a politically pressured “outside review”, Jake Gardner’s life was over. On Friday a judge signed off on the “special prosecutor”‘s arrest warrant.

Mr Gardner had launched a legal defense fundraising appeal on GoFundMe. Can you guess what GoFundMe did next, boys and girls?

Yes, they shut it down. And in the craphole of American justice, if you haven’t the money to fight a long legal battle, you can’t win a long legal battle. Believe me, I know from experience. Ann Coulter summarizes the last four months of Jake Gardner’s life thus:

Will Mr Kleine and the other wretched poltroons of Omaha officialdom have a moment of regret over their actions? I won’t even bother wasting your time with that, since we covered it more or less in an episode of The Prisoner of Windsor back in the summer.

Jake Gardner was a Marine and a Trump supporter. You can get a sense of him here, back in January 2017:

I won’t link to the Twitterfeasting on his suicide. It is not yet true that half the country wishes the other half dead, but significant numbers certainly do.

~I can’t resist reprising another item from that September 2020 column, especially in light of the way GoFundMe and the like took down any appeals to help Kyle Rittenhouse raise money. Unless you’ve been in a big, long case, you have no idea of the cost of American litigation: it’s unlike anything in any other legal system. Nevertheless, here’s that second item:

Incidentally, for the last few years during my own legal travails, I have been asked why I don’t set up a GoFundMe account.

Steyn, I’m a principled rock-ribbed conservative who wants to support other principled conservatives, but the only way I can do that is by sluicing my donation through a de facto monopoly run by woke billionaires opposed to everything I believe…

Thanks but no thanks, Mister Conservative. When I guest-host for Rush, we occasionally post some official audio from iHeart, as with my Donald Trump Jr interview. Thomas Ahern, another rock-ribbed conservative so rock-ribbed his rock-ribbed Twitter handle is “Western Patriot”, doesn’t care for the “audio controls” on such iHeart embeds, so demands:

What kind of “Western Patriot” wants to transfer even more power to YouTube (which is a subsidiary of Google, which is a subsidiary of Global Thought Control, Inc)? What kind of “Western Patriot” will pledge his life, fortune and his sacred honor but only so long as he can do it on a monopoly platform owned by totalitarian control freaks? I take it Mr Ahern is a Rush listener. If so, all the years he’s listened are negated by his wish to make Rush just another wholly owned subsidiary of Google YouTube. How much more of your country do you have to lose before you get serious?

Oh, and if you think Google/Facebook/Twitter/GoFundMe lean against conservatives now, you ain’t seen nuthin’ yet if they win in six weeks’ time. God save us from Twitter dress-up “patriots”. This cartel is already more powerful than your constitution, and will eventually nullify it.

~That’s what I said in September 2020. But “Western Patriot” and “Eagle Patriot Minuteman” and “Old Glory Butch-Boy” and “Patriot Chick-Fil-A Eater” and “Mega-Patriot Black Rifle Coffee Chugger” still want to enrich even further YouTube et al. You’re not any kind of patriot, “Western Patriot”; you’re part of the problem.

~As for nullifying the constitution, what with all the one-way “fortifying”, that’s close to a done deal. Here’s Steyn Club member Josh Passell’s take on the present state of the Bill of Rights:

The First and Second Amendments are perpetually besieged, particularly by the Left. WI v Rittenhouse has exposed a few more cracks in the dike between individual liberty and the omnipotent state.

The Fourth prohibits “unreasonable searches and seizures” and demands “probable cause”. While those conditions don’t apply to KR, just about every FBI raid lately is carried out with little or no regard for either. The Biden girl (age 40) loses her diary, and one year later the G-men raid the home of the head of an organization that chose not to publish it, and long ago turned it in to the police for its safe return. For those inclined to read her mixed reviews of her dysfunctional family, TBG’s diary is elsewhere online.

The Fifth Amendment forbids the accused to be “compelled in any criminal case to be a witness against himself”. Which didn’t stop the prosecutor from citing KR’s silence on the events of the night in question. KR was under no obligation to speak; the judge warned against making any issue of his silence. Yet in his closing arguments he tosses that live grenade in the courtroom…

The Sixth requires the accused “to be confronted with the witnesses against him; to have compulsory process for obtaining witnesses in his favor”. The state withheld evidence–drone camera footage, witness identity–from the defense…

The Eighth: “Excessive bail shall not be required, nor excessive fines imposed, nor cruel and unusual punishments inflicted.” The entire incarceration of the 1/6 protesters in 16 words. (bold font added)