Posted at 10:38h in A C W T Statements by ericgeorgatos

It will be great if Mark Steyn ever again finds a note of optimism about America’s future; for now, he’s pretty far down in the realm of hopelessness.  His latest, reproduced below, is hard to dispute.

But the struggle to discover, understand and live the spiritual freedom that America’s founders proclaimed–Reagan referred to it as mankind’s “long climb from the swamp to the stars”–is never over; it is forever ongoing.  No permanent defeat; no final victory.

I’d like to suggest there is no such thing as a left or right. There’s only an up or down – [up] man’s old-aged dream, the ultimate in individual freedom consistent with law and order, or down to the ant heap of totalitarianism. And regardless of their sincerity, their humanitarian motives, those who would trade our freedom for security have embarked on this downward course. 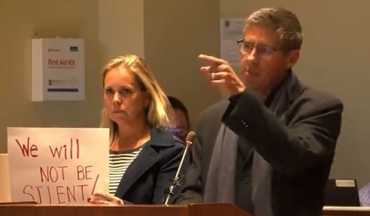 ~Covidstan has sufficiently restricted my movements these last two years that I see fewer things firsthand than I might wish and am dependent, therefore, on media coverage, which is never a good thing. The parents pushing back against the social engineers (at best) and (at worst) rape-enablers of the Virginia school boards seem, given the provocations, calm and of moderate mien by comparison with the sick ideological commissars attempting to silence them.

But elsewhere there is the increasing sense that the combination of Covid, the election and the accelerating politicization of agencies such as the Department of Justice and the FBI have pushed us closer to the Yeatsian point: “the centre cannot hold“. This exchange is making the rounds:

AUDIENCE MEMBER: When do we get to use the guns? No, and I’m not — that’s not a joke. I’m not saying it like that. I mean, literally, where’s the line? How many elections are they going to steal before we kill these people?

Charlie Kirk, the founder of Turning Point USA, was not anxious to go down this road:

KIRK: Hold on. We are close to have momentum to be able to get this country back on a trajectory using the peaceful means that we have at us… They fear us holding the line with self-control and discipline, taking over school board meetings. They are the ones that are willing to use federal force against us.

And I know that people get fired up. We are living under fascism. We are living under this tyranny. But if you think for a second that they’re not wanting you to all of a sudden get that next level where they’re going to say, OK, we need Patriot Act 2.0. If you think that, you know, Waco is bad, wait until you see what they want to do next.

Mr Kirk is trying to thread a difficult needle here: “We are living under fascism” and “tyranny”, but it is not yet time for getting out the guns.

This is not the normal discourse of a settled constitutional order going back two hundred years. As I said on Tucker and Rush in the wake of January 6th, the danger in the state inventing out of whole cloth “insurrections” and a “domestic terrorist” movement is that people take you at your word and it becomes a self-fulfilling prophesy.

~Speaking of which, we are marking the tenth anniversary of my bestselling book After America. The observances are muted because, from the underpass at Del Rio to the school board meetings of Loudoun County, it has proved too accurate. Nonetheless, I remind you of the book’s opening chapter:

Look around you. From now on, it gets worse. In ten years’ time, there will be no American Dream, any more than there’s a Greek or Portuguese Dream. In twenty, you’ll be living the American Nightmare, with large tracts of the country reduced to the favelas of Latin America, the rich fleeing for Bermuda or New Zealand or wherever on the planet they can buy a little time, and the rest trapped in the impoverished, violent, diseased ruins of utopian vanity.

‘After America’? Yes. It will linger awhile in a twilight existence, arthritic and ineffectual, declining into a kind of societal dementia, unable to keep pace with what’s happening and with an ever more tenuous grip on its own past. For a while, there may still be an entity called the United States’, but it will have fewer stars in the flag, there will be nothing to ‘unite’ it, and it will bear no relation to the republic of limited government the first generation of Americans fought for. And life, liberty and the pursuit of happiness will be conspicuous by their absence.

On the other hand:

The United States is still different. In the wake of the economic meltdown, the decadent youth of France rioted over the most modest of proposals to increase the retirement age. Elderly ‘students’ in Britain attacked the heir to the throne’s car over footling attempts to constrain bloated, wasteful and pointless ‘university’ costs. Everywhere from Iceland to Bulgaria angry mobs besieged their parliaments demanding the same thing: Why didn’t you the government do more for me? America was the only nation in the developed world where millions of people took to the streets to tell the state: I can do just fine if you control-freak statists would shove your non-stimulating stimulus, your jobless jobs bill and your multi-trillion-dollar porkathons, and just stay the hell out of my life, and my pocket.

On the world stage, Joe Biden is the literal embodiment of America’s “twilight existence, arthritic and ineffectual, declining into a kind of societal dementia”. The favelas are here in many American cities, and I see that the citizens of what only a quarter-century ago alleged conservative David Brooks hailed as the future – Burlington, Vermont, the chichi post-political latte town of do-gooder liberalism – is now getting used to routine stabbings on Main Street.

I miss the Tea Party because their grievances were mainly economic. Today’s dissatisfactions are more profound and primal: We are not arguing about socialized health care, but about the agreed meaning of America, and whether it will come to more blood than it’s already coming to.