Posted at 10:27h in A C W T Statements by ericgeorgatos

We’ll have more to say later about the raid on Mar-A-Lago, but since we featured Mark Steyn yesterday, and he’s already out with his take today–that’s a good place to start.

Steyn is as cerebral, knowledgeable and articulate as anyone, and he knows world and American history.  That’s what is needed to fully grasp what is going on in this country in 2022.

“…the dirty stinking rotten corrupt US Department of Justice…”

Criminalizing Opposition in a Pseudo-Republic 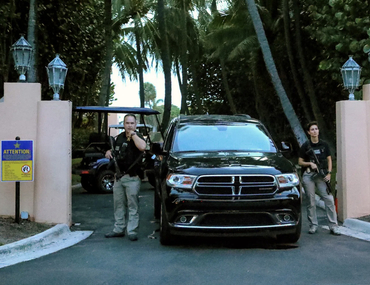 For almost a decade and a half now, the American “republic” has been decaying to the defining condition of a one-party state – that is, the total merger of the ruling party and the state. Last night, the dirty stinking rotten corrupt US Department of Justice signed off on a raid on Mar-a-Lago, so we’ve now moved into hardcore banana-republic territory: the regime’s cops are busting into the home of the opposition leader. We’re told this is because Trump took some “classified” documents with him when he left Washington. Yeah, that’s always a pretext for an armed raid: You could ask Hillary Clinton or Sandy Berger.

The FBI has been getting more brazen about its political thuggery this last year, increasingly relaxed about putting its thumb on the democratic scale. As my old pal from Hillsdale days, Joy Pullman, notes in a column written pre-Mar-a-Lago:

In Michigan, the FBI openly meddled in the upcoming election by affecting the selection of candidates, arresting and charging the formerly leading Republican candidate for governor for misdemeanors. The FBI raided Ryan Kelley’s home while polls showed him leading the primaries. In the primary election last week, he came in fourth.

Mission accomplished – and all while too many stars of the rube right were still insisting that there are just a few bad apples at the top, I know the rank-and-file, they’re salt of the earth, straight-shooting G-men, they gave me this cute lapel pin, etc, etc. There are no straight-shooting G-men: Who do you think are manning the raids, you chumps? Where are the whistle-blowers? Or even the guys who say, “No thanks, I didn’t sign up for this”? It’s a wholly corrupted institution and has been for the best part of a decade. The default position for what’s left of the opposition party ought to be that the FBI is beyond reform, and will be replaced by a new agency with vastly circumscribed powers.

Instead, I see Kevin McCarthy is now threatening Merrick Garland with an “investigation” and ordering him to preserve all documents. Ooooooh! Maybe, after the coming Republican landslide, they can appoint an independent counsel; maybe John Durham or Robert Mueller is available. Why would anyone take McCarthy’s threat seriously? If you don’t grasp that in today’s America there is no equality before the law, there is no point even discussing public affairs.

As for Trump, well, on The Mark Steyn Show three days after the “election” I suggested:

It’s my view that after the Biden regime takes power, as in many coup situations, they will want to have the previous leader arrested. I’m being perfectly serious here. It is the intention of the Democrat Party to put Trump in jail. So, when he launches the ‘Trump News Network’, it’s gonna need to be based out of Costa Rica or the Turks and Caicos or somewhere.

Does that sound a little extreme? Well, here was The Washington Post‘s recovering “conservative” columnist Jennifer Rubin round about the same time:

It’s not only that @realDonaldTrump has to lose, his enablers have to lose. We have to collectively burn down the Republican Party. We have to level them. Because if there are survivors….they will do it again.

“Survivors”? There’s that ol’ Churchillian magnanimity in victory. As I said five days after the “election”:

Even if they never succeed in gaoling him, they will surely use the “peaceful transition” to put in place a couple of decades’ worth of litigation-without-end. Come to that, can he even trust the Secret Service agents they’ll assign to him?

He will never be a ‘normal’ former president – because they are determined to exclude him from those ranks.

“Normal” is not a word to apply to present-day Washington – which is why my advice to President Trump during that “peaceful transition of power” was to get the hell out of the country and be the king across the water. The purpose of Liz Cheney’s January 6th “hearings” is to lay the groundwork for turning Trump into just another of those poor schlubs who were wandering around the Capitol in MAGA hats and ever since have been in solitary awaiting a scheduling hearing for a conference call on a pre-trial hearing for their constitutionally guaranteed “speedy trial”. In our first Clubland Q&A after the “insurrection” I put it this way:

In the early hours of November 4th, the Dems made it plain that Trump was no longer going to be president.

What they’ve done this last week is decided…..it’s not enough for him not to be president, they don’t want him to be a former president either. They don’t want the Grover Cleveland scenario, where he comes back in four years. So it’s important to them, as I said this morning, that he be the most ex ex-president ever, more ex- than Nixon. Nixon they still invited when they had these photo ops in the Oval Office, where all the presidents get together and stand around the desk with the incumbent. They’re not gonna be inviting Trump to that. They want Trump to be an ex-president, they want to put him in jail… The Paul Ryan view of conservatism is never let a victory amount to anything, whereas the Democrats’ view is never let a crisis go to waste. So they weaponized, they seized their moment with what happened at the Capitol on Wednesday, and they are determined to make Trump the most ex ex-president in American history…

He’s going on the nineteenth, he’s leaving a day early, the entire family are flying to Mar-a-Lago. And we’re told this is because he wants to be able to fly out on Air Force One, whereas the departing president on the twentieth usually leaves on what’s designated as Air Force Two… If I were him I would fly on my own plane, because I don’t entirely trust, I’m not sure I’d entirely trust anyone, anything operated by the federal government, if you know what I mean.

They actually would like to get him in jail… The district attorney in New York would like to put Trump in jail… It’s nothing to do with Trump, it’s way beyond Trump, it’s to teach you guys the lesson, the same lesson that the European Union has tried to teach some of its member states, that you can’t do this…

In the modern era you get a choice between a left-of-center party and an ever so slightly, barely discernible, right-of-left-of center party. So you guys, you losers, you didn’t play by those rules, you supported Trump and you let him hijack the ineffectual, ever so slightly right-of-left-of-center party that had basically outstayed its welcome for whatever it is, two generations now. And that’s not gonna happen again… You stay within the house-trained choices because the Trump moment is never gonna happen again.

Everything they’re doing now is consistent with what I said then. Because it’s been the Deep State/Democrats’ plan since early November 2020 – that’s to say, two months before the “insurrection”, which merely provided them with a vivid example of Trump as a “danger to democracy”. More from that Q&A:

After what we’ve known about Comey, Clapper, Brennan, McCabe, Peter Strzok, all the other guys with the book deals and the CNN contracts, and on the other hand, you know, Carter Page, George Papadopoulos, all the rest of it, on the receiving end of those guys, what do you think is more likely – that Hunter Biden is in danger of prosecution by the Department of Justice, or that Trump is?

Oh, relax, the Durham Report will be coming any day now! If you’re still talking about “investigations” and “hearings”, you’ve already lost. If that’s the best McCarthy can do, it’s hopelessly insufficient to the moment: There ought to be total non-cooperation with the regime by the GOP with the intent of bringing it to a standstill – because this “administration has gone way beyond politics and is corrupting institutions to a degree that will make violence inevitable.

Yeah, right. A throwaway line from The Mark Steyn Show of December 15th 2020:

By the way, when they mention Covid and 2022, that’s code for: ‘Yeah the US midterms are gonna get stolen too.’