No one punctures the moral and intellectual bankruptcy of leftist elites better than Mark Steyn. 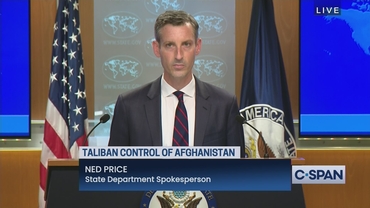 America is a global laughingstock right now, but that’s no reason not to give Chairman Xi and Putin and every up-country village headman in Helmand a few more yuks. Step forward, State Department spokeswanker Ned Price:

State Department calls for Taliban to include women in its government

The United States is dead as a global power because of this kind of indestructible stupidity. You’ve lost, you blew it, it’s over: The goatherds just decapitated you; could you at least have the self-respect not to run around like a headless chicken too stupid to know it’s nogginless? Or like a broken doll lying on its back with its mechanism jammed on the same simpleton phrases: “Diversity is our strength… diversity is our strength…”

Contrast the Washington presser with that in Kabul:

Hmm. Ned Price vs Zabiullah Mujahid: tough call. The mountain of non-existent dollar bills that the bloated husk of federal government blows through every minute surely should buy sufficient self-awareness to know that, whatever else it may be, this is not a day for wankery as usual. Even CNN has a more proximate relationship to reality. Here is their Kabul correspondent, Clarissa Ward, reporting on Sunday:

And here is the same Miss Ward reporting on Monday: 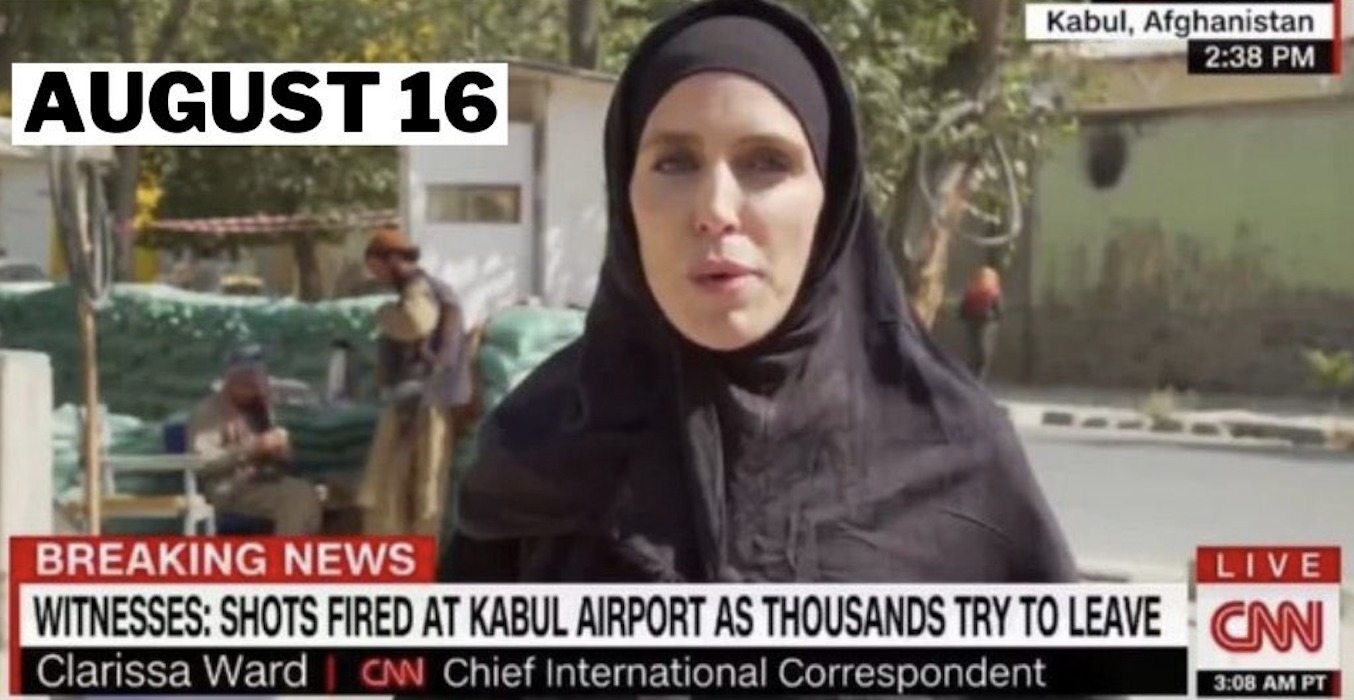 Gee, did anyone back at the anchor desk ask her what’s with the wardrobe switcheroo?

Just for the record, the Kingdom of Afghanistan introduced votes for women in 1964 – whereas Switzerland did not get even a very limited female franchise until 1971, and full suffrage not until the Nineties.

Yet, oddly, every Pushtun warlord prefers to keep his retirement account in Zurich.

Maybe, after taking twenty years to lose to goatherds with fertiliser, you State Department arses might have enough humility to recognize that that that big messy world is subtler than your one-size-fits-all clichés.

Wokeness is weakness, and diversity is where nations go to die. Contrast our spokesmen with theirs: in the White House, Jen Psaki picked the weekend to take a vacation, possibly to film her scenes in another hilariously viral Mr Non-Binary Goes To Washington video; at Foggy Bottom, Buffoon McStriped Pants III issued a stern warning on the need for the firebreathing mullahs to include more female deputy-assistant-undersecretaries; and, at the Potemtagon, Kabul Kirby stood there doing his usual anguished-eyebrows Saddy Sadcakes routine.

All these images project global impotence: none of these people would be a serious and prudent power’s projection of itself to the world.

Meanwhile, back at the palace in Kabul, the Taliban commander giving a victory speech is Gholam Ruhani, released from Gitmo (under Bush) because he said his “only wish” was to return to Afghanistan to (per the Department of Defense documents published, natch, in a London newspaper) “assist his father, who is sick, in operating the family appliance store in Kabul”.

I don’t know what appliances they sell at Ruhani & Son over at 237b Sword of the Infidel Slayer Street, but evidently they’re enough to take out the global superpower. On social media, the wags are having great sport with Joe Biden’s recent taunt that no American needs an AR-15, because, if you want to defeat the mighty US government, you’re gonna need fighter jets and nukes.

Well, the Taliban just took out Joe as Leader of the Free World with no nukes, no F-15s, just a big bunch of AR-15s.

But don’t worry, here’s the alleged Commander-in-Chief sitting in a figure-hugging golf-shirt in an empty room. Look at how big his desk is! He needs a desk that big to be briefed by multiple agencies on just how over his guy in Kabul is. Most great powers would only have one agency to brief him on how over he is, but a mighty superpower has multiple agencies and departments and bureaux to tell him how totally over things are.

Is the Buffoonocracy that runs the United States so out of it they seriously think that that image communicates strength and leadership?

Or, like all those “Afghan National Army” bombardiers with brothers in the Taliban, are Washington’s elites merely working for the other side?

As I said on Sunday, America’s telly pundits don’t appear quite to grasp the scale of this humiliation: The lefties are merely acting, serving as an unpersuasive palace guard for their guy in the Oval Office (and, as palace guards go, they’re rather more devoted than Kabul’s proved). The righties still can’t let go of the reflexive rah-rah deference to the dumbest military brass on the planet.

With respect to that, since Lower Manhattan and Kabul Airport are now the bookends of the dead superpower’s failed war, I am as sickened now as I was sickened then by the absence of honor and decency at the upper levels of the pseudo-republic. In my column six days after 9/11, I was so naïve I couldn’t understand why nobody had resigned:

Two days after the Argentine invasion of the Falklands in 1981, Lord Carrington, Britain’s Foreign Secretary, Sir Humphrey Atkins, the Lord Privy Seal, and Richard Luce, the Minister for Latin-American Affairs, all resigned. Lord Carrington felt ‘it was a matter of honour’ — they were the men charged with both guaranteeing the security of the Falklands and evaluating General Galtieri’s regime in Buenos Aires.

‘I was wrong in the assessment of what they were doing,’ said Carrington, ‘and therefore I am responsible’ – that word again. In interviews he reiterated the point:

‘There has been a British humiliation. I ought to take responsibility for it.’

Why is General Thoroughly Modern Milley still there? Other, that is, than to hang on long enough to extend his array of diversity ribbons down his chest, over his crotch, round his perineum and up his butt.

Why is the hack lobbyist who purports to be US Defense Secretary still there? Other, that is, than to continue modeling his Delta Variant-resistant plexi-visor for every American emissary to wear on runways, even when they’re not as non-socially-distanced as Kabul’s. Is the visor made by his old friends at Raytheon?

If you saw my long-form interview by Tucker Carlson yesterday, you’ll know he asked me about writing obituaries. And I replied that it was very difficult to do obits for people for whom you had total contempt; you had to have some basic human sympathy even for the most unlovely types. And yet, as the world dances on the grave of Washington’s “elites”, I cannot muster a jot or tittle of human connection with the likes of Milley and Austin, Kirby and Psaki and Biden: They will all die richer than you, and with half the citizenry convinced of their virtue.

Do you think there’s any chance of getting Taliban commanders to teach at West Point? It might be a nice change of pace for cadets to learn from someone who actually won a war.

We all laugh …but it’s actually a very fair point: Would you rather hear first-hand from a mullah about how they took out the hyperpower in a week? Or from a corrupt toad like Milley who can only express bewilderment at how showering billions on other corrupt toads from Herat to Jalalabad didn’t pan out?

A final thought in my capacity as a nineteenth-century imperialist a hundred years past his sell-by date: One of the first mistakes the new US occupiers made was not restoring the Kingdom of Afghanistan. Ahead of the 2002 loya jirga to select a new head of state, over eight hundred delegates announced that they wanted the old sovereign, Zahir Shah, returned to his throne as a constitutional monarch. That’s eight hundred out of 1,450 – so he would have won on the first ballot. Buffoon McStripedpants III from Foggy Bottom was not in favor of that, so the Yanks delayed the start of the loya jirga in order to lean on the King to back off. Washington wanted Karzai because he was the kind they can do business with – a corrupt grifter just like them. In the Muslim world, monarchy is one of the few (Saudi Arabia excepted) countervailing forces to Islam, and indeed had been in Afghanistan. But it didn’t fit Yank plans, so it fell to the American “observer” to announce to the natives that, sorry, but the King isn’t a candidate.

Tourists in the heart of darkness, tipping the locals with thousand-dollar-bills and marveling at how friendly they are.

As I said on Tucker last night, western civilization is sliding off the cliff, and most people in the western world aren’t even aware of that. Qanta Ahmed has this poignant vignette in The Spectator:

I was in Cairo in the days after a 2017 Palm Sunday terrorist attack in Alexandria on Coptic Christians that had emptied Egypt of tourists. On my flight down to Aswan, I noticed that I was the only non-Chinese passenger. One informed me she was a hydroelectric engineer travelling to study the Aswan Dam with her colleagues. My Egyptian guide wryly informed me later in Egypt the Chinese are known as the ‘conquerors’ — he meant of all Africa.

A Japanese official famously feared that the Pearl Harbor attack on December 7, 1941 had awakened a sleeping giant.  He was right to be afraid.  And whether he realized it or not, the ‘sleeping giant’ was not then and is not now the American ruling class.  It’s the American people.

Eighty years later, the American people have been awakened again.

Things didn’t turn around for America or the world on December 8, 1941, and they won’t turn on a dime in August 2021.  But they are going to turn…just watch–