Sundance at CTH: Part I, The Solution – Deconstructing the Fourth Branch of Government

04 Sep Sundance at CTH: Part I, The Solution – Deconstructing the Fourth Branch of Government

Posted at 11:04h in A C W T Statements by ericgeorgatos

As with Ted McCartney at American Greatness, Sundance at Conservative Treehouse is not just wailing and ranting about the profound challenges jeopardizing America’s survival, but stepping up with constructive solutions.  And in Sundance’s case especially, deconstructing the fourth branch of government is borne of a deep understanding of the moral and philosophical and religious foundation of America…and how things have gone so far haywire.

This guy gets what’s going on at a level very few grasp, but retains a practical ‘common man’ realism about what can and should be done.

Abolishing the 17th Amendment is almost impossible to imagine as possible…but it is possible, and success starts with having the courage to  openly propose it.

Part I, The Solution – Deconstructing the Fourth Branch of Government

Now that we understand the problem [CRITICAL BACKGROUND HERE], we move into the solution discussion.   There is a way to deconstruct the current system of corruption within the U.S. government that follows a path outlined by the framers of our constitution.  In this series of articles we will outline what I believe to be the way forward.  It is a narrow path, and each step is dependent on the American electorate understanding the challenge.

There is a way to stop the Intelligence Branch, but it requires some outside-the-box thinking and reliance on the Constitution as a tool to radically change one element within government. In order to achieve it, we must focus on three tiers needed for success:

• Tier One is “tactical civics” at a local level. Engaged and active citizen participation at the community, city, town and hamlet level of society. This is what might be described as grassroots level. School Board level; City Council level; County Commissioner level.

• Tier Two is “extreme federalism” at a state level. Engaged and active citizen participation through your State House and State Senate representative. This is state level assembly and action demands upon the House, Senate and State Governor.

• Tier Three the challenge of “federal offices” on a national level. This is where a singular action can be taken upstream that allows the first two tiers to retake control over federal offices. This is where we throw the One Ring into the fire of Mordor.  CTH has tested this approach with a multitude of political allies who understand the issue.  All eventually agreed with the solution at a federal level; it won’t be easy, but it will be possible.

I cannot emphasize enough how each tier is dependent on the preceding tier.  Additionally, each voter has to understand the larger objective in order to see how they are all connected.  That is the goal of this outline.

• Tier One – The lack of attention to local or ‘tactical civics’ is now manifest in your community with examples of school boards dictating mandates to you and your family.  In almost all of these instances where local officials running amok, you will note their baseline detachment.  They have lost their ability to identify exactly who they work for; perhaps they never had it to begin with.  Various local officials no longer view YOU as their employer.  Instead they view you as someone they need to protect themselves from.  We cannot address the state level disconnect that is needed for correction unless and until we first reset the relationship at a local level between the citizen and the community government.  That means you MUST get involved.

• Tier Two – The lack of attention to federalism, states rights, responsibilities and state government overall, is manifested most clearly in the outcome of the 2020 election; and the issue of election integrity.  Even in states where republicans are in control of the state House and Senate, there are few legislative bodies focused on ensuring election integrity.  Just look at how much difficulty grassroots organizations are having with the demand for audits, reviews, and election controls.  This is an outcome of detachment from the legislatures.

It will be impossible to correct the federal issues of government without first and foremost making sure we have the right representatives in our state legislature.  You will see why that is going to become more important when we talk about the needed action in tier three.  The outlook of every single state representative toward the federal government is critical.  We must elect state level representatives who understand and cherish the principles behind ‘state’s rights‘ and the tenth amendment.

If we have the right state-level representation, then -and only then- can we move into the third tier and begin traveling the path that addresses the federal issues.

• Tier Three – The nucleus of corruption amid every element of the federal institutions of government is the United States Senate.   The U.S. Senate is the single most powerful part of the federal government.  All other federal corruption is dependent on a corrupt and ineffective Senate.  If we correct the problems with the Senate and reconnect the representation within the chamber to the state-level legislative bodies, we will then be able to demand change.

There will be ZERO institutional allies in this effort.  Because of the scale of their power, the Senate will not give up control easily; and every institution of society and government will attempt to stop We The People from taking back control of the upper chamber.  Every entity from Wall Street to multinational corporations, big tech, banks, foreign governments and world organizations will be aligned against us.   When you truly understand the epicenter of the corruption, then you are able to see the tentacles extending from it.

It would be easy to say “repeal the 17th amendment“, it is another thing entirely to walk through the process to make that happen.  Yes, ultimately we do need a full repeal of the 17th amendment, and return the selection of the senators from each state with a nomination and appointment process within the state legislature.  [Common Explainer Here]

Seventeenth Amendment- “The Senate of the United States shall be composed of two Senators from each State, elected by the people thereof, for six years; and each Senator shall have one vote. The electors in each State shall have the qualifications requisite for electors of the most numerous branch of the State legislatures. 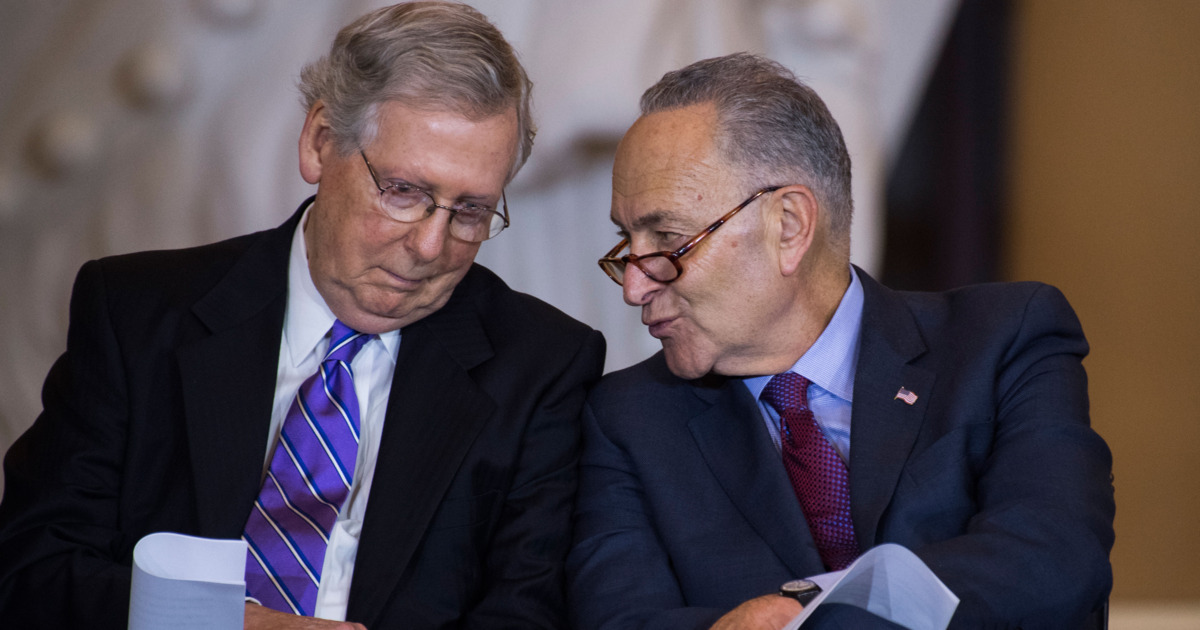 Prior to the 17th amendment, there was significant state level corruption as business interests and senate candidates worked in power groups with party officials to attain the position.  Politicians seeking Senate seats began campaigning for state legislative candidates in order to assemble support.  The state legislative races then became a process of influence amid powerful interests seeking to support their Senate candidate.   Get the right people in the State legislature and you can get the Senator appointed.

Those state-level entities, bankers, wealthy people of influence, later became the permanent K-Street lobbying groups once the 17th amendment was ratified. In essence, they just shifted the location of their influence operation from the state to an office in Washington DC.   [Those same power groups, albeit much larger, now write the physical legislation we see in congress.]  Additionally, prior to the 17th amendment, there were issues of vacancies in federal senate seats as state legislatures could not agree on an individual Senator.

The biggest issue following the passage of the 17th amendment became Senators who were no longer representing the interests of their state.  Instead they were representing the interests of the power elite groups who were helping them fund the mechanisms of their re-election efforts.  A Senator only needs to run for re-election every six years.  The 17th amendment is the only amendment that changed the structure of the congress as it was written by the founders.

Over time, the Senate chamber itself began using their advise and consent authority to control the executive and judicial branch.  The origination of a nomination now holds the question: “Can this person pass the Senate confirmation process?”  The Senate now abuses this power to ensure no one challenges them.  Additionally, the Senate began using their oversight capacity to control elements within the executive branch and judicial branch.   The full scope of that issue in modern form is OUTLINED HERE – which is the cornerstone of the Intelligence Branch of Government.

If we can repeal the 17th amendment and return the selection to the state legislature, you can see where the background work of Tactical Civics and Extreme Federalism begin to take on importance.   [NOTE: Within the repeal effort we would need to include a recall process for states to reach out and yank back their Senator if they go astray; the ability to recall was missing in the original construct of the framers; it would need to be added.]

In part-II we will outline the process for repealing the 17th amendment in the current era.  It will take the creation of two paths being built simultaneously in the background of the 2024 federal election.

◊ PATH ONE is the primary platform of the presidential candidate…. a visible and emphasized mandate that includes: “vote me into office and you are voting to repeal the 17th amendment“.  This specific election issue would need to be the #1 priority of the candidate and spoken at every event.  This approach would give the presidential candidate the mandate to demand congress to act if he won the 2024 election.  We would need a warrior of epic strength, resolve and fortitude.  A Trumpian candidate, if not Trump himself.

◊ PATH TWO is the parallel path built along with the 2024 election platform path, and put into place in the event that Congress refused to accept the mandate.  Obviously, this could be an ugly battle.   The second path is a convention of states in the first year of the successful presidential candidate’s term in office.  The ‘convention of states‘ would be detailed, strategically planned, and the future schedule determined during the 2024 GOP convention preceding the November election (assuming the right candidate wins).   That way, if congress refuses to act on their own, within say the first 100 days of the new administration, the state legislatures will then assemble a convention for the singular and limited purpose of one action item: “repeal the 17th amendment“.  That’s it. Full Stop.  Nothing more. Nothing else entertained.

There is a lot more to this, and a lot more to cover in discussion of this.  However, this is the path that can resolve most of the issues we face with an out of control federal government.   The shift in power would kneecap the Intelligence Branch of Government by re-instituting genuine oversight and control. A repeal of the 17th amendment stops Senators from campaigning, needing to raise money and puts them directly into the accountability position as a steward for the interests of their state.

The people within each state would then have a mechanism to address any negative federal action by contacting their state legislative representative.  In a worst case scenario, a rogue Senator could be removed within days if they support any federal legislative activity that is not in alignment with the state interest.  This approach also wipes out most of the power amid the Senate Majority Leader, as he/she could also be recalled by the state and would be less likely to work against the interests of the majority in the chamber.