Posted at 16:00h in A C W T Statements by ericgeorgatos

Sundance at Conservative Treehouse has become something of a broken record on this topic, but he’s right to do so.  It is imperative that the American people wake up to what the FBI and DOJ have become.  Because with that awakening comes the further awakening that there is absolutely nothing that can be done to repair them from within.  They must be completely dismantled, and ‘born again’.  They are simply anti-American at this point.

The FBI is not a law enforcement or investigative division of the U.S. Department of Justice.  The FBI is a political weapon of a larger institution that is now focused almost entirely toward  supporting a radical communist agenda to destroy civil society in the United States.

Anyone who continues to push the fraudulent “honorable FBI rank and file talking point”, is, at this point in history, willfully and purposefully operating to deceive the American people on behalf of government interests who are intent on destroying us.  It is not a difference of opinion any longer.  It is a matter of just accepting what is staring us directly in the face….

More people are awakening to the uncomfortable reality that the FBI is a domestic enforcement mechanism for the Fourth Branch of Government.  The most recent awakening is being driven by the brazen FBI raid on Project Veritas founder James O’Keefe with the intent to leak the information to their allies at the New York Times.

Make no mistake, this is one long continuum of FBI activity that is only growing increasingly more obvious as they consider themselves unaccountable to anyone except their own ideological interests.   Who is the check in the U.S. justice system to provide oversight over the FBI?  The uncomfortable answer is no one.

Remember, the oft reported relationships surrounding the divisions within the Fourth Branch:  ♦The CIA uses The Washington Post. ♦The State Dept uses CNN, and ♦the FBI uses The New York Times.

James O’Keefe is currently in a lawsuit against The New York Times.  The FBI raids the home of O’Keefe and then passes along the confidential communication between Project Veritas and their legal team to the New York Times.  With a large audience, Tim Poole is realizing what CTH readers have been discussing for a decade:

Absolute power ends with absolute corruption.  The day after Christopher Steele appeared on ABC news to construct the defensive position against the information later released in an indictment by John Durham of ‘Trump-Russia’ conspiracy promoter Igor Danchenko.   The very next day, the FBI raids the home of Oleg Deripaska.

Russian billionaire Oleg Deripaska was the former employer of Christopher Steele {Go Deep}.  The timing of the raid was transparently political.  George Stephanopoulos interviewed Steele, because the Clinton operation in 2016 was at risk.  Stephanopoulos’s interview was risk mitigation.  Deripaska’s raid the next day was cover.

The FBI raid on O’Keefe was done for the same ideological purpose as the raid on Deripaska.  This is all one long continuum.  All of this is coordinated by political operatives using the DOJ and FBI as their enforcement mechanism.

Washington DC houses the Fourth Branch of Government, an unaccountable and abusive control vehicle; rusted to the core with metastatic corruption.  Unfortunately, Bill Barr was the bondo application, and John Durham appears to be the spray paint. The clear objective is to cover up the corruption from public view.  The FBI is to Washington DC what the FSB represents to Moscow.

♦ For all the Tim Pooles of the world now starting to see this, let me remind you of where this is going.  The DOJ and FBI now claim “anti-law enforcement violent extremists – pose the “greatest threat” domestically this year and likely into 2022″, the narrative continues.  WHY?….

Perhaps I am wrong, but the only time I can recall in modern U.S. history that aggressive and illegal federal activity was halted mid-effort, was the example of the Clive Bundy ranch in 2014.  Armed citizens forced federal authorities, including the FBI, to back down.   In response to their loss, former AG Eric Holder vowed to revive “a domestic terrorism task force.”  Contemplate that response against the 2021 statements of the FBI saying domestic violent extremists (DVE’s) represent the greatest threat.  Can you see the connective tissue?

From the worldview of the DOJ/FBI, law-abiding U.S. citizens  – pushed to the point of taking up defensive arms against federal agents – are a threat.  Ergo, the newest definition of “Domestic Violent Extremists, or DVEs”, to define who the FBI view as their most substantive enemy.  Two years after the Bundy Ranch standoff, the FBI shot and killed LaVoy Finicum, fulfilling their promise to eliminate extremists as defined by their worldview.

Consider the case of the first recorded ISIS attack on U.S. soil in Garland, Texas in 2015.  The FBI not only knew the shooters (Elton Simpson and Nadir Soofi) in advance, the FBI took the shooters to the venue and were standing only a few yards away when Simpson and Soofi opened fire.  Yes, you read that correctly – the FBI took the terrorists to the event and then watched it unfold.  “An FBI trainer suggested in an interview with “60 Minutes” that, had the attack been bigger, the agency’s numerous ties to the shooter would have led to a congressional investigation.”

Remember, shortly before the 2018 mid-term election, when Ceasar Syoc – a man living in his van – was caught sending “energetic material that can become combustible when subjected to heat or friction”, or what FBI Director Christopher Wray called “not hoax devices“?   Remember how sketchy everything about that was, including the child-like perpetrator telling a judge later than he was trying to walk back his guilty plea because he was tricked into signing a confession for a crime he did not create.

Or more recently, the goofball plot to kidnap Gretchen Whitmer that involved 18 suspects, twelve of them actually working for the FBI as the plot was hatched?  And we cannot forget the January 6th. DC protest turned insurrection effort, which is clearly looking like an FBI inspired and coordinated effort.

Have we forgotten the Atlanta “Olympic Park Bombing”, and the FBI intentionally setting up transparently innocent, Richard Jewel?

Then, there’s the entirety of the FBI conduct in “Spygate”, the demonstrably evident FBI operation to conduct political surveillance against Donald Trump using their investigative authorities; and the downstream consequences of a massive institutional effort to cover up one of the biggest justice department scandals in the history of our nation.   The original effort against Donald Trump used massive resources from the DOJ and FBI.  Heck, the coverup operation using the Mueller/Weissmann special counsel used more than 50 investigative FBI agents alone.

And of course, the FBI still had 13 extra agents available to rush to a NASCAR racetrack to investigate a garage door pull-down rope that might have been perceived as a noose; but the serial rape of hundreds of teenage girls, eh, not-so-much effort – even when they are standing in front of the FBI begging for help.

[At this point, I am increasingly convinced, by evidence, the FBI themselves are the perpetrators involved in sex trafficking, human smuggling and abduction as part of their operational mission.]

It is important to realize exactly what happened in the case of the Olympic gymnasts and the rape of hundreds of teenage girls.  When the victims and parents told the FBI about what Larry Nassar was doing, the FBI did not bungle the investigation, the FBI did not investigate.

But worse…. after the parents kept coming back to the FBI to ask what was going on; and report that other parents were now reporting that new rapes and assaults were ongoing; the FBI told those parents an investigation was ongoing.  Except it wasn’t. The FBI was lying. 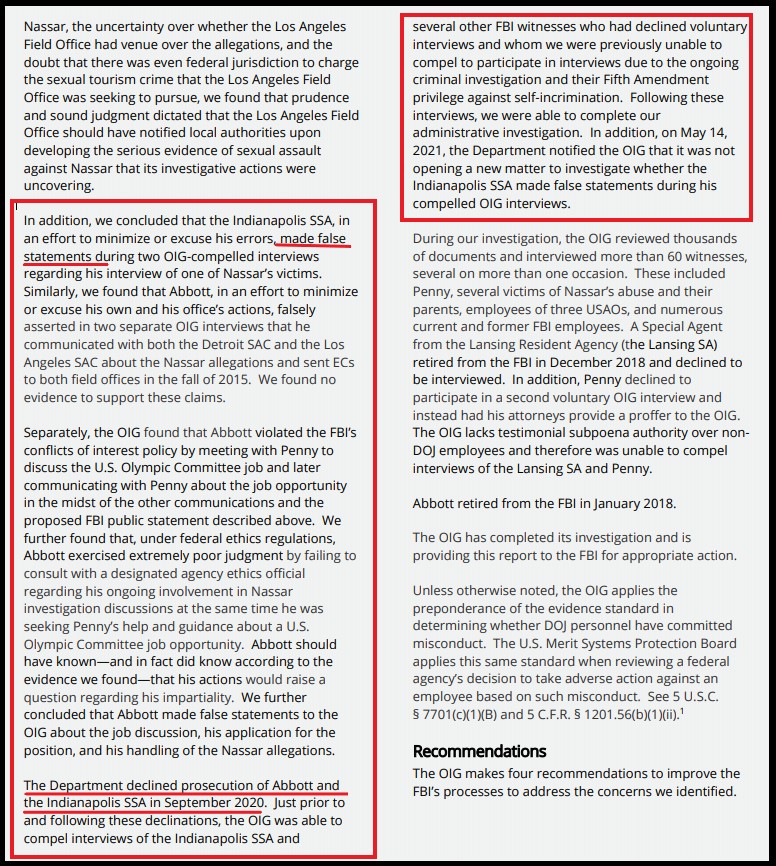 After the FBI was caught lying about their conduct, they then lied to the internal oversight, the OIG, about everything surrounding their conduct.    The FBI didn’t make a mistake, or drop the proverbial ball, they intentionally and specifically maintained the sexual exploitation of teenage girls by doing absolutely nothing with the complaints they received.   This is not misconduct, this is purposeful.

Then, as if to apply salt to the open wound of severe FBI politicization….what did the FBI do with the Hunter Biden laptop?

[Notice I’ve set the issue of the disappearing Huma Abedin/Anthony Weiner laptop –in the known custody of the FBI– over there in the corner, next to missing investigation of the Awan brothers.]

♦My point is this…

What the Federal Security Service (FSB) is to the internal security of the Russian state; so too is the FBI in performing the same function for the U.S. federal government.

The FBI is a U.S. version of the Russian “State Police”; and the FBI is deployed -almost exclusively- to attack domestic enemies of those who control government; while they protect the interests of the U.S. Fourth Branch of Government.  That is the clear and accurate domestic prism to contextualize their perceived mission: “domestic violent extremists pose the greatest threat” to their objective.

Put another way, “We The People”, who fight against government abuse and usurpation, are the FBI’s actual and literal enemy.

Let me be very clear with another brutally obvious example.  Antifa could not exist as an organization; capable to organize and carry out violent attacks against their targets; without the full support of the FBI.   If the FBI wanted to arrest members of Antifa, who are actually conducting violence, they could do it easily – with little effort.

It is the absence of any action by the FBI toward Antifa, that tells us the FBI is enabling that violent extremist behavior to continue.  Once you accept that transparent point of truth; then, you realize the FBI definition of domestic violent extremism is something else entirely.

The FBI is not a law enforcement or investigative division of the U.S. Department of Justice.  The FBI is a political weapon of a larger institution that is now focused almost entirely toward  supporting a radical communist agenda to destroy civil society in the United States.

Anyone who continues to push the fraudulent “honorable FBI rank and file talking point”, is, at this point in history, willfully and purposefully operating to deceive the American people on behalf of government interests who are intent on destroying us.  It is not a difference of opinion any longer.  It is a matter of just accepting what is staring us directly in the face….

…Learn How The 4th Branch of Government Operates  – HERE !