Weekly Email for the week ending on Friday, November 25th, 2022

Posted at 21:33h in Show Highlights by ericgeorgatos
Welcome to the AmericaCanWeTalk Weekly Email for the week ending on Friday, November 25th, 2022!
NOTE  our schedule this past week —  We had live shows on Monday & Tuesday, but took a Thanksgiving break for the rest of this week!
LIVE shows will resume on Monday November 28th.
Click on any of the words in dark red font below to go directly to the show clips described.
What I think of you …
I think of you, our show listeners and weekly newsletter subscribers, as a family of patriots working together to save this precious country.  So, when I talk with you each day on my show, I feel like I am talking to family.  I hope that you feel that way too.
Many of you joined us in Dallas for our October 15th Third Annual Women for Freedom Summit. For those who didn’t, I am sharing the Summit speeches with you, a few each week, in this newsletter, and this week I’m sharing the final four of these speeches. I linked below the remarks by Lt. Col. Matthew Lohmeier, Evan Sayet, Lara Logan and Kevin Freeman. You can listen to all of these extraordinary speeches on our website, HERE.
Personally … (my weekly column for you!)
Hello My Very Fine Friends,
I hope all of you enjoyed a beautiful and gratitude-filled Thanksgiving!
This past week Dr. Douglas Frank joined me in studio to discuss one of the most important threats facing America. His point can be captured in one of the slides he created and that he shared during our interview, which I’ve pasted in below and will explain in a moment.
This graph provides nearly irrefutable evidence that our entire election system in America is rigged. I’ve explained this below, but first, two quick points.
Not just Wisconsin.  This below graph happens to be about the state of Wisconsin, but Dr. Frank has painstakingly researched and recorded and created similar graphs revealing similar wildly inexplicable voter registration anomalies in numerous other states.
Not just voter registrations. The below data relate to voter roll registrations. Other graphs and data Dr. Frank has developed refer to reported voter turnout divided by age and county (described in this post). Voter turnout graphs also reveal “this ain’t natural” stark and precise parallels between counties within each state, which indicate the use of an algorithm, and not votes, driving reported voter turnout numbers.
What he has uncovered is literally monstrous. Once you grasp what he is revealing, you will never think about elections the same way again. And you just may become motivated to get (more) involved in fighting for honest elections. 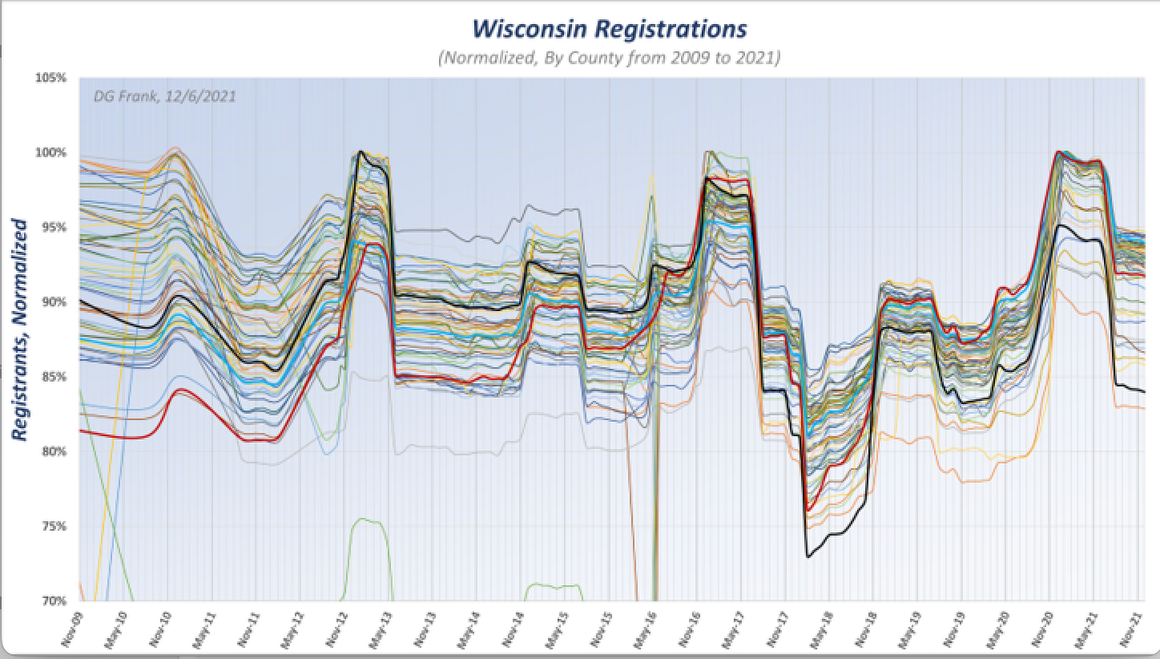 So what does this slide mean?
Please go HERE (to our website) to read the rest of this week’s column and the very clear explanation of HOW this graph constitutes an astonishing level of proof that our elections are manipulated … it will be WELL worth your time …
Dr. Frank has mountains more evidence of manipulated voter rolls and other extreme election anomalies for which there is no rational explanation. AND he has a plan for how to fight this kind of fraud … which he explains in our interview. I strongly urge you to listen to it, here.
Someone asked me recently why I talk about election fraud on my show so much, especially as many have “moved on” from this issue. The answer is that unless we fix it, nothing else matters.  If our elections are manipulated, We the People are no longer the Sovereign. It matters because all the campaigning and speech-making and door-knocking and campaign donating are utterly irrelevant … we will have lost control of our country and our freedom and our rights.  Those ascending to and cementing their unelected power over us do not intend to honor our freedoms and rights. They do not believe in the constitution, the Bill of Rights, or the foundational American principle of self-governance, and ruling with the consent of the governed. They believe only in perpetuating their own power.
THAT’s why I keep talking about it, because I want the principles of honest elections, self-governance via democratically elected government in our republic, and the role of We the People as the sovereign, to be honored forever.
Speak Truth About America.
Facts Matter.  Truth Matters.  America Matters.
I’ll talk to you next week. I can’t wait!
DebbieG
SUMMIT SNIPPETS:

Evan Sayet is the author of “Woke Supremacy” which lays out his observations about the lunacy and danger of wokeism. He’s an extremely insightful observer and thinker about the mental machinations and downright contorted delusions that lead people to foolishly embrace ideologies that make no sense and have always failed throughout history.

Kevin Freeman wrote one of the most important books of our time, “According to Plan” which lays out in a most compelling fashion how the mission spelled out by the CPUSA decades ago is being played out and fulfilled in America today. Great book, great speech, serious alarm.

Lara Logan spoke to our Summit about her life and what she has fought for, and about a wide range of issues the leftists in this world are trying to inflict on America, from transgenderism, to social credit scores, and much more, and about the need to fight for America and truth.

LINKS TO THIS WEEK’S SHOWS:
Whole Shows This Week:
All of our shows are always available for you to watch at our website, AmericaCanWeTalk.org.
Just two shows this week!
Our list of this week’s shows:
Monday 11.21.22
Tuesday 11.22.22
(Some of) My Commentary This Week:
Died Suddenly: Doctors & Data vs Biden & Passports
GOP Civil War: Ronna, Reince, Kevin & Mitch.
Thanksgiving: Thanking God for America
Freedom Fighters Around the World Rising Up: Brazil & Iran & Europe
Why It Matters 11.22.22
Interviews This Week:
Dr. Douglas Frank is the truly brilliant show guest I wrote about in my above weekly Personally column. His work exposing via irrefutable data the massive evidence that America’s elections are rigged, is vitally important. Because it is data-driven and mathematical in nature, it requires patience and persistence to understand it. But once you do, you will never look at our elections the same way again.
On AmericaCanWeTalk, I talk truth about America, and about why the stories and news of the day, matter to you.
Thank you so much, my very fine friends, for listening to AmericaCanWeTalk!
Because America Matters,
Debbie Georgatos
Host: America, Can We Talk?